Below are terms that are associated with use of transducers and electrical equipment in areas which are defined as hazardous by national rating agencies.

Explosion proof products are capable of containing an explosion. The term explosion-proof does not indicate that the product is capable of withstanding an external explosion, but only of withstanding an internal explosion without allowing flames or hot gases to escape from the transducer housing to trigger an explosion in the surrounding atmosphere. The explosion-proof term is assigned to those products which are certified by the national rating agencies such as Underwriters Laboratories and Factory Mutual Research after meeting the 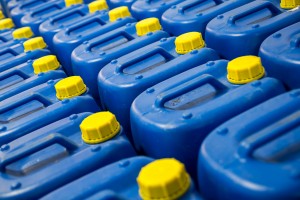 ir specifications and passing their tests. Unless certified by one of these agencies, the product does not meet the explosion-proof requirements of the National Electrical Code.

Both national rating agencies, as well as the American National Standards Institute adhere to the same definitions of what contributes a hazardous area.

These areas are defined as:

Class I is subdivided into groups A (acetylene), B (Hydrogen and butadiene), C (diethyl ether, ethylene, isoprene, and UDMH), and D (acetone, gasoline, lacquer solvent, styrene, propane, and natural gas). Class II is divided into Groups E (metal dust), F (carbon black, coal, and coke), and G (flour, starch, and grain dusts). All classes include two divisions. Division I covers electrical equipment directly exposed in an explosion atmosphere of the material of a specific group. Division II covers electrical equipment in an explosive atmosphere only when accident or fallout occurs, or in a properly vented direct exposure.


Qualification for a rating automatically qualifies the equipment for a lower class and group. For example: Class I equipment can be used in Class II and Class III applications with no restrictions. An "explosion-proof" rating is given only to a single piece of equipment for a specific class, division, and group. Equipment installation is the sole responsibility of the end user, and the National Electrical Code clearly defines the requirements of this installation. For example, a piece of equipment can carry a Class I rating and qualify only for a Class II rating after installation and inspection if the installation is not up to the original rating requirements.

The National Electrical Code allows no modification of the rated equipment. A single piece of equipment, a system, or parts of a system can receive an intrinsically safe rating for a class, group, and division. The rating agencies usually test the equipment as a system, and all parts of the system receive the highest class and group reached by the system regardless of any previous explosion-proof rating. The entire system also receives a collective rating, which will generally be that of the lowest rated piece within the system. If the system is not modified by the end user, it retains the rating. The end user must install the equipment as supplied, and installation procedures are not specified by the National Electrical Code.