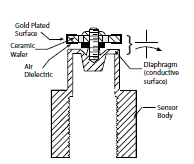 The diaphragm is constructed of a low-hysteresis material such as 17-4 PH SS or a proprietary compound of fused glass and ceramic (Setraceram). These firmly secured surfaces (or plates) are mounted so that a slight mechanical flexing of the assembly, caused by a minute change in applied pressure, alters the gap between them (creating, in effect, a variable capacitor). The resulting change in capacitance is detected by a sensitive linear comparator circuit (employing proprietary custom designed ASICs), which amplifies and outputs a proportional, high level signal.

Setra’s Capacitive RH sensors consist of a ceramic substrate on which a thin film of polymer is deposited between two conductive electrodes. The sensing surface is coated with a micro-pourous metal electrode, allowing the polymer to absorb moisture while protecting it from contamination and exposure to condensation. As the polymer absorbs water, the dielectric constant changes incrementally and is nearly directly proportional to the relative humidity of the surrounding environment. Thus, by monitoring the change in capacitance, relative humidity can be derived. Setra’s patented charge balance ASIC measures the capacitance change and uses digital potentiometers to precisely calibrate the replaceable sensor tip.

Setra's Current Switch and Transducers use inductive current transformers (CTs) to sense an AC current in a primary conductor. The CT generates a low level AC current which is proportional to the current flowing in the primary conductor. The resulting low level AC current is rectified and compared to either a factory set or field adjustable set point value. When the sensed current exceeds the set point value, the internal circuitry triggers the output switch to change state from open to short in a current switch. The current transducers provide a DC output with is linearly proportional to the sensed current.

CLICK HERE to discover all of Setra's sensing solutions.