Critical environments depend on such spaces being free of contaminants. An important method for achieving this is creating positive and negative pressure rooms. In positively and negatively pressurized spaces, air flow is highly controlled by adjusting the pressure differential between both the room in question and the area around it. This ensures air only moves from cleaner areas to more contaminated spaces.

What is Negative Pressure?

In terms of rooms, negative pressure does not mean the absence of pressure; rather, it is when an area has a lower pressure than the spaces around it. Negative pressure rooms are designed to contain harmful airborne contaminants including bacteria, viruses, fungi, and VOCs. Maintaining differential pressure between the negative room and the adjacent space helps limit particle transmission. To prevent contamination from escaping, a negative pressure room must have sealed windows and doors.

What is Positive Pressure?

Positive pressure means an area or room has a higher pressure than the space around it. Because they are designed to keep out contaminants, positively pressurized rooms are among the cleanest spaces in a hospital and are used to protect the patients most vulnerable to airborne infections. If there is a leak or open door in a positive pressure room, clean air is forced out rather than contaminated air let in.

Positive pressure can be used in conjunction with negative pressure to ensure airborne contaminants do not enter or escape a space, such as an anteroom next to an isolation room. Positive pressure also helps maintain sterility in areas like operating rooms and supply closets.

Guaranteeing Your Space is Properly Pressurized 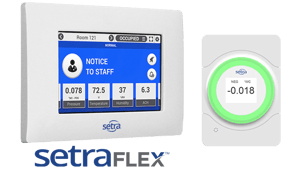