There are two types of particles monitored in a critical environment: viable and non-viable. Viable particles are living microorganisms monitored with the viable air sampling method of settled plates. Particles that fall into this category include:

Viable particle counting monitors not only air, but personnel and surfaces as well. To monitor viable particles, samples are captured and colonized before being counted and analyzed. Typically, viable particles range in size from ≈0.2µm to ≈30µm.

Viable air sampling assesses the probability of particle contamination. The main disadvantage of proper viable particle counting is it takes days or weeks to deliver necessary results. The lack of immediate results can cause problems if there is a spike in pathogens. Such contamination would remain undetected until considerable time has passed, which can sometimes be too late to take corrective actions.

Non-viable particles like dust and smoke do not contain a living microorganism and are not generally harmful on their own; rather, they act as transportation for damaging viable particles. 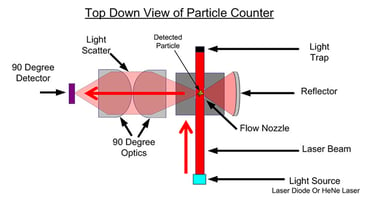 Non-viable environmental monitoring counts airborne particles with a system of lasers instead of settled plates. Results from such real-time monitoring are instantaneous.

Although particle counters are more mechanically advanced than air samplers, they are unable to differentiate between viable and non-viable particles. Due to this drawback, ISO regulations dictate particle counters cannot operate alone in a Class 7 space.