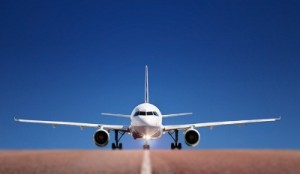 Barometric altimeters calculate and display altitude by measuring the local barometric pressure and converting that measurement into altitude. This conversion is done using the Standard Atmosphere Table, an international standard representing the barometric pressure at various altitudes on a so-called "standard day" which assumes a consistent non-linear relationship between altitude and pressure.

In reality, the relationship between pressure and altitude is not consistent. As weather patterns move, high and low pressure fronts change the barometric pressure seen at a fixed location. Thus, an uncorrected altimeter located at an airport runway will indicate that the runway is moving up and down with respect to sea level as it sees daily variations in barometric pressure! The variation seen can be significant. A 1" Hg change in barometric pressure (which can occur when a major storm front moves in, for example) is equivalent to about 1,000 feet in altitude.

Did you know...
Before digital electronics were available, the system devised for adjusting an altimeter for variations in local barometric pressure was called Altimeter Setting Indicator (ASI). Now it's the DASI system.

In the Digital Altimeter Setting Indication (DASI) system, the first step is to measure true barometric pressure at a location or "station" (typically an airport) whose exact height above sea level, called "station elevation," is known. That local barometric pressure measurement is then converted to local sea level pressure, ie, the pressure that would be measured if the station were dropped to seal level and all other conditions (latitude, longitude, weather) remained the same. Seal level pressure is needed because altimeters are typically referenced to sea level. The jargon for this adjustment process is "reduction of station pressure to sea level pressure" even though the adjusted pressure reading would be higher than the true pressure reading if the station were above sea level.

This local sea level pressure is the DASI. This number, measured in units of pressure, is broadcasted by local National Weather Services and by airport control towers. For example, as a pilot approaches an airport, he gets the current DASI reading from the airport and enters it into his on-board altimeter, thereby "correcting" the altimeter for the local variations in barometric pressure. The pilot then knows what his true altitude is relative to the runway.

*NOTE: Devices which are connected with an RS-232 serial port must be set up to communicate at the same rate of speed.