Often we hear terms used to describe pressure transducers or terms commonly used in the HVAC/R and industrial industries, but there may be some confusion as to their meaning. Here are a few commonly used terms and their definitions. 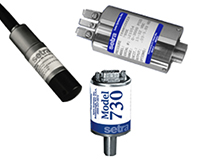 Ambient Conditions:
The conditions (pressure, temperature, etc.) of the medium surrounding the case of the transducer.

Atmospheric Pressure:
Pressure of the atmosphere at the earth’s surface. At sea level this pressure is not constant (it varies with the weather,) but averages around 100 kilopascals (kP). Ambient pressure may in other circumstances be measured in pounds per square inch (psi) or in atmospheres (atm). One atmosphere is also approximately the ambient pressure at sea level and is equal to 14.7 psi. 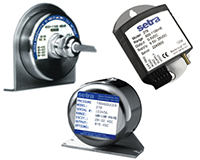 Bourdon Tube:
An early, mechanical pressure gauge consisting of a flattened tube that tends to straighten under internal pressure; today usually used with a potentiometer to produce an electrical output.

Burst Pressure:
The maximum pressure that may be applied to the positive pressure port without physical damage to the sensing element.

Capacitive Sensing:
Detection and measurement of pressure through the change in voltage across a capacitor, one plate of which is a diaphragm which deflects slightly with changes in applied pressure. 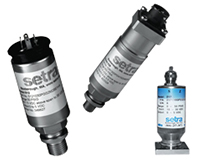 Differential Pressure:
Pressure measured relative to a reference pressure. Referred to as pounds per square inch differential or (psid)

Excitation:
The external electrical voltage and/or current applied to a transducer for its proper operation.

Hysteresis:
The maximum difference in output, at any measured value within the specified range, when the value is approached first when increasing and then decreasing pressure.

Manometer:
An early instrument for measuring pressure; originally a U-shaped tube containing liquid (water, oil or mercury), one limb opening to the gas volume to be measured, the other closed or connected to a registering or recording instrument. Modern versions utilize diaphragms, bellows or other devices for sensing relative pressures.

Newton (N):
The unit of force in the International System of Units (SI); the force required to impart an acceleration of 1 m/sec2 to a mass of 1 kg.

Pascal (Pa):
The standard unit of pressure (or stress) in the SI system: equal to 1 newton per square meter (1 N/m2).

Proof Pressure:
The maximum pressure that may be applied without changing performance beyond specifications (typically, 0.5% FS zero shift).

Range:
The spread between the maximum and minimum pressures between which the transducer has been designed to operate

Repeatability:
The ability to reproduce output readings when the same pressure value is applied consecutively, under the same conditions, and in the same direction

Response Time:
The length of time required for the output to rise to a specified percentage of its final value as a result of a step change in pressure.

Span:
The algebraic difference between the limits of the range. EX: 0.1 to 5.1 Volts DC; span is 5 VDC. Sometimes used to designate full scale output; i.e. 5 VDC.

Thermal Error:
The maximum change in output, at any pressure value within the specified range, when the temperature is changed from room temperature to specified temperature extremes 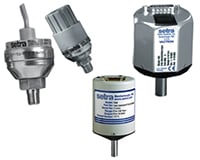 Thermal Zero Shift:
The zero shift due to changes of the ambient temperature from room temperature to the specified limits of the operating temperature range.

Vacuum:
Generally refers to pressures between 0 and atmospheric; often measured in 0-30 in. Hg Vacuum. Referred to as pounds per square inch vacuum (psiv)