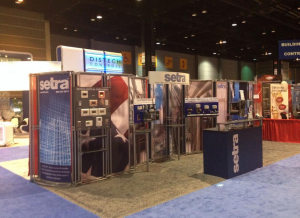 Thank you to all who visited us at Booth 3823 in the Building Automation section of the AHR Expo. We enjoyed seeing both new and familar faces! The world's largest HVACR event was anything but boring. With 8% more exhibitors than last year and approximately 62,000 attendees, AHR was a huge success.

As a result of the record breaking size of AHR this year, Contractor Magazine compiled a featured product guide for those who couldn't visit the over 2,000 exhibitors. They even asked both attendees and exhibitors to use #BestofAHR on Twitter to see just who stood out from the rest.

Topics that were the talk of the expo:

Back in November, 10 2015 AHR Expo Innovation Award winners were announced across 10 different HVACR categories. These recipients were also up for the 2015 AHR Expo Innovation Award. On Tuesday, January 27th, Danfoss VTT (Variable Twin Turbo) Series Compressor received the honor to be crowned the most innovative product at the AHR Expo this year. A panel composed of ASHRAE members reviewed and selected the Variable Twin Turbo Series Compressor based on the foundation of it's innovation, application, and value to the consumer. Coming from the "Green Building" category, "The VTT Series of compressors enables chiller manufacturers to bring the benefit of the oil-free, variable-speed, magnetic-bearing technology to larger capacity chillers while using new IntraFlow technology to deliver best-in-class full-and part-load efficiencies," said Frank D. Ford, Director of Product Management. Congrats Danfoss!

Football and Sensors at AHR 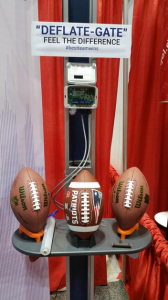 That's right. With the Super Bowl right around the corner, Setra brought the Patriots to the AHR Expo. With Deflategate on the NFL's mind, footballs were put to the test. As seen to the right, we asked attendees to feel the difference between a NFL "legal" football and one that was deflated, measured by Setra's differential pressure sensors. With a big push in both the energy management and critical care industry, the Power Patrol Meter and the SRIM2, a room pressure monitor, were on featured for the first time at our booth.

Hope to see everyone back at next year's AHR Expo in sunny Orlando, FL!

Chris Brooks is the Director of Marketing at Setra Systems, Inc., responsible all marketing activity and strategic planning for Setra Worldwide and Dolan-Jenner Sales.

Prior to joining Setra, Chris worked in marketing for Green Ray LED, an LED light manufacturing company, where he focused on helping Green Ray expand throughout emerging markets.

Chris holds a Masters of Business Administration from the University of Virginia’s Darden Graduate School of Business and a BA in Political Science from Yale University.