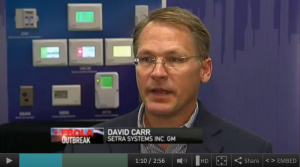 Setra’s Room Pressure Monitor, SRPM, was highlighted on the ‘Saving Dr. Brantly’ segment on NBC a few weeks ago, as it was installed on all of the isolation rooms at Emory Hospital in Atlanta.

On Wednesday October 22, Peter Howe from New England’s News Station (NECN) came to Setra to interview David Carr, General Manager of Setra, to learn more about how Setra’s line of Room Pressure Monitors can help prepare hospitals around the world for an epidemic, such as Ebola.

Being prepared for an epidemic shouldn’t be taken lightly. Hospitals need to be sure they have the proper monitoring systems in place to protect both the patient and the rest of the hospital. Setra’s Room Pressure Monitors, specifically the SRPM, is a perfect example; this product monitors the differential pressure in isolation rooms and alarms locally & remote personnel if anything has been breached. This is the most critical piece of isolation room equipment because if it is not working correctly, contaminated air could be unknowingly spread throughout the facility.